A special thanks to Jennifer Ardoyno for providing this guest post!

I know I’m one, among thousands of moms, who has a child dealing with the
frustrations of eczema. My son, who is now 8, has had eczema his whole life. I am all
too familiar with the sleepless nights, scratching until bleeding, countless doctors’
appointments, and numerous creams and ointments…all brought on by eczema.

For years, I could never seem to find anything that helped with my son’s skin
condition. Everything was a short-term fix. The problem was, with his constant scratching,
that he was developing frequent staph infections…some were even MRSA staph
(methicillin-resistant Staphylococcus aureus). Sometimes, it would take months to clear
up…a total nightmare. The cycle of itchy skin, continuous scratching, staph infections and
then another trip to the doctor for antibiotics seemed to be an endless loop. Especially
since he was still an active little boy. He was picking up germs and bacteria everywhere.
At his worst, we would use triamcinolone (steroid cream) and Protopic (non-steroid
cream). He would also take hydroxyzine at night for itching (oral medicine) and Claritin in
the mornings. And then, Aquaphor for his moisturizer.

In May 2011, his skin was extremely flared. I knew he had developed another staph
infection. He had little whiteheads around his waistline, pus under one of his fingernails
and under his nose was pretty crusty. In addition, his eczema was itchier than usual. The
bleach baths I had been giving him weren’t clearing up the infection like they sometimes
would. So we made another trip to the dermatologist’s office. He told me he wanted us to
try something new before he prescribed my son another antibiotic. It was CLn® BodyWash.
And, he was to continue his steroid cream and antihistamine for four weeks. At that time, if the
infection was still there, then he’d prescribe an antibiotic. I thought, there is no way. I really
thought it was a waste of time, and we’d be back in his office within a week. But at this
point, I’d try anything. 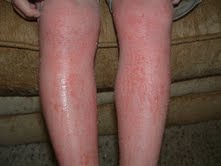 After a week of using the CLn® BodyWash, I noticed my son’s skin started to heal.
After four weeks, the infection was gone! I was shocked. Nothing had ever cleared up
the staph infections except for the antibiotics. Now, because we’ve been able to keep
the infections away, his eczema is hardly noticeable. It no longer controls his life. The
body wash actually leaves his skin feeling fresh and clean. Today, he still uses the body
wash once or twice a week just as a preventive and Vaseline if needed. He hasn’t used
hydroxyzine since May of this year and has probably taken Claritin only twice in the past
five months.

Using CLn® BodyWash has truly changed my son’s quality of life. Here we are,
almost a year-and-a-half later, and my son hasn’t been on an antibiotic since, and he hasn’t

had to use any of his steroid creams…in more than a year! His self-confidence has increased
greatly. He’s able to sleep through the night, play sports and enjoy our family vacations to
the beach. These were all things that were hindered by his inflamed eczema. He no longer
has to visit the nurse’s office every other day to apply more creams and ointments. Last
year, he only made two trips to the nurse’s office! And now that he’s 8, I love that this is a
product he can use himself. In fact, I keep a bottle of CLn® in each bathroom. This makes
it convenient for the whole family to use. I use it on the kids after a long day of playing at
the park, zoo or other public areas. It assures me that all the bacteria they picked up are
washed away.

Thank you CLn® BodyWash! You have made me a very happy mom!

Have questions about CLn Body Wash or itchy skin and eczema? We will have a top dermatologist answer the FIRST 20 questions we receive! 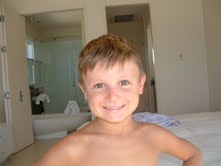 Jennifer’s son is a long-time sufferer of eczema. Now 8 years old, he’s turned a corner in
his therapy with the help of doctor-guided treatments and use of a new cleanser, CLn ®BodyWash.

7 thoughts on “Once upon a time, we struggled with eczema….”