When eczema introduced itself to my family, I was told about a great product called Aquaphor. A non-medicated ointment that is thicker than lotion, better than vaseline and last forever (that’s if your little one doesn’t sneak to play in it!) It worked wonders for my daughter’s skin as it locked in moisture to reduce the amount of scaly, dry patches of skin. And seemingly in a matter of days, I could tell a BIG difference in her skin by using it before bed. However, as time passed and I became more aware of natural emollients, I started to wonder is there anything better and healthier for her skin.

As time passed, I began to notice that Aquaphor’s magic is slowly wearing off. Her skin is probably evolving and/or adapting to the various treatments for her eczema. Aquaphor is no longer locking in moisture, so I’m on a search for an Aquaphor alternative. And soon, because eczema is taking it’s toll and making on her skin equivalent to the Sierra desert, plus it’s winter! I plan on testing new creams & oils for at least 7 days, given no allergic reactions and compare the results.

First up: Coconut Oil for eczema 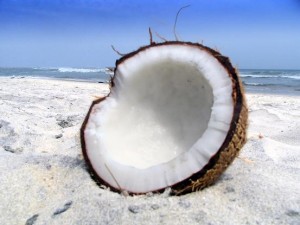 Yesterday I purchased my first jar of unrefined Coconut Oil. From the looks of it on the outside, the clear jar suggests a thick creamy texture. However, upon using it, I’ve found that the oil starts off solidified, but quickly turns into a thin oily state when applying it. If you are use to the thick coating of Aquaphor, this could take a little getting use to. Coconut oil doesn’t absorb like lotion, it creates a thin oily layer on top of the skin that gradually absorbs. I almost want to mix it with something to make it thicker so I know it’s staying put and will lock in the moisture. It’s too early to tell if this is necessary as it’s only been one day.

I think she smells REALLY good, as I don’t mind a faint smell of Coconut. Actually I can really only smell it on my hands after applying it and it quickly fades away. I’d equate it to a light bath scent after a shower. It lasts maybe 10 minutes and then the smell is gone. Considering all of the natural products out there that have pungent smells, this one is rated a 9 out of 10. My ideal scent would be no scent at all.

I was extra amped about trying a new cream and I applied it all over. Not the best idea in hindsight. Luckily, there are no reactions so far. In the future, I will do a patch test first.

What do you use as an emollient or moisturizing cream? I’m open to suggestions as I will be giving a few a try! Be sure to read the results!

6 thoughts on “The search for an Aquaphor alternative”