As some of you have read in my “Can this trump eczema?” post, we recently had a hard time this past weekend with an unexplained blood infection affecting our little one. It surfaced when we were almost 800 miles from home, of all times! As various tests and blood work was being performed, it was hard to make her happy. One the first day, the only thing that made her smile was leaving the hospital! Who could blame her.
The next day a nurse, who was administrating her IV medicine, asked if she received a hospital bear. I quickly said no and became internally excited knowing that this would definitely make her happy while she’s in the hospital. The nurse took it one step further and placed the same bright green florescent gauze on the bear’s arm as was on her’s. Even on the same right arm. If I could describe how much she lit up when she saw the bear, and the look on her face when she noticed her bear had the same gauze that was on her arm…it was overwhelming. She couldn’t stop hugging, holding the bear and pointing to the gauze. She wouldn’t let it out of her sight! It’s the little things that make kids happy. (And parents too 🙂 ) I had to take a picture! 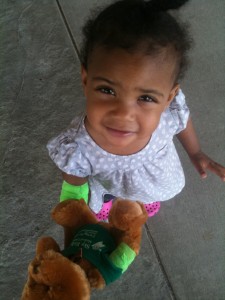 Look at her cute bed hair!

Looking back a light bulb went off and it dawned on me, not one of her friends wears a ScratchMeNot. Wouldn’t it be nice if our scratching babies and toddlers had “someone” they could relate to? Through our experience, I realized kids need someone just as much as adults. (if not more!) Imagine that!! For some reason, I overlooked this need until now. So I have an idea I want to share and see what you think…

What do you think about your scratching baby or toddler having a stuffed animal wearing a ScratchMeNot? A little cute lamb wearing a ScratchMeNot just like him or her? I am so excited about this idea, but I want to make sure I’m not wrapped up in my own world. Please take a moment to answer this on Facebookand/or leave a comment!

It would help me tremendously to know if this is important to other parents of itchy babies, not just me!